When we went to Italy, we ate some lovely Italian food such as Pasta, Pizza and my favourite- GELATO!

You’re probably thinking: Yeah SheriBerri EVERYONE loves Ice Cream! But Gelato isn’t just Ice Cream, it is the Italian version and Gelato is very similar and different to Ice Cream in many ways.

So what’s the difference?

Gelato flavours and Ice Cream flavours are very similar, but some of my favourites were:

When you go to Italy, you have to get the right sort of Gelato! My Mum and I looked up how to find the best type and we found these rules: 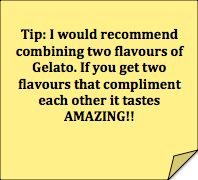